The Epic T-Rox is a purple, green, and grey colored monster. Its general shape is still distinctly similar to that of the T-Rox and Rare T-Rox, but has a smooth exterior more akin to that of the Rare Reebro

Epic T-Rox is only available for breeding (or buying) during limited time events.

The combination to breed Epic T-Rox is different for each island.

Epic T-Rox, like all Epic Naturals are only available for breeding and/or buying some of the time during special events. Examples of such events:

To see how efficient Epic T-Rox is at generating resources compared to other monsters check: 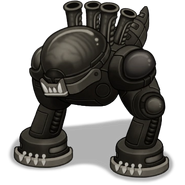 In 2019, Epic T-Rox dressed up as the Xenomorph from the Alien series. It also has 4 pipes coming out, and marked teeth and claws. This was repeated for 2020.