The Epic Oaktopus first appeared on the 8th of May 2019.

The Epic Oaktopus is similar in body structure to the Rare Oaktopus, having webbed hands and tentacles resembling roots. Its tentacles are noticeably longer and the top of its head is chipped and uneven. Its eyes are a glowing green color, and its mouth is a faded burgundy. It possesses three sharp teeth and a cut branch as a nose. Neon green fungi protrude through its bark. It also has four brightly colored feathers sticking out of the top of its head; their color starts as green, then fades to light yellow, then to a light orange. At the base of these feathers is an orange-red, down-like material.

Epic Oaktopus is only available for breeding (or buying) during limited time events.

The combination to breed Epic Oaktopus is different for each island.

Epic Oaktopus, like all Epic Naturals are only available for breeding and/or buying some of the time during special events. Examples of such events:

Every monster has different things that they like. For every unique object that they like that's placed near the monster, the monster's happiness will increase by 25%. Placing more than one of the same liked item near a monster will still only increase its happiness by 25%. If there's a Unity Tree on the island, items don't need to be near the monsters. Below are the things liked by Epic Oaktopus:

To see how efficient Epic Oaktopus is at generating resources compared to other monsters check: 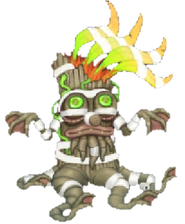