My Singing Monsters Wiki
Register
Don't have an account?
Sign In
Advertisement
in: Cold, Water, Plant Island,
and 13 more

The Epic Maw is an indigo colored monster. It has horns on its head and chin. Its lips are now blue, and its teeth are sharp. The dots on its fur are replaced with lines, resembling the ones that Rare Mammott has. The pimples you would see on a Common Maw now have holes. It has eyes just like its rare counterpart, but it has a nose.

Epic Maw is only available for breeding (or buying) during limited time events.

The combination to breed Epic Maw is different for each island.

Epic Maw, like all Epic Naturals are only available for breeding and/or buying some of the time during special events. Examples of such events:

To see how efficient Epic Maw is at generating resources compared to other monsters check: 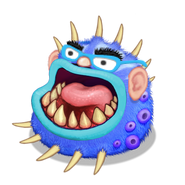 Like Maw in 2012, Epic Maw is dressed up in Groucho Glasses, complete with nose, mustache, eyebrows, and it used a pair of fake ears to hold it up.

On December 12th, 2018, Epic Maw adorned some mistletoe and wore lipstick. It was one of the first Epics ever to dress up for the Festival of Yay.