My Singing Monsters Wiki
Register
Don't have an account?
Sign In
Advertisement
in: Monsters, Cold, Plant Island,
and 16 more
English

The Epic Mammott is a monster who arrived to My Singing Monsters on September 26th, 2018.

The Epic Mammott has purple fur. It has four arms speckled with magenta polka-dots﻿, and green eyes with brown pupils. It also has floppy ears which are too adorned with polka-dots, and long horns. It possesses pointed teeth unlike its common cousin, along with much longer fingernails and toenails. Some of these features make it resemble a goat.

Epic Mammott is only available for breeding (or buying) during limited time events.

The combination to breed Epic Mammott is different for each island.

Epic Mammott, like all Epic Naturals are only available for breeding and/or buying some of the time during special events. Examples of such events:

Every monster has different things that they like. For every unique object that they like that's placed near the monster, the monster's happiness will increase by 25%. Placing more than one of the same liked item near a monster will still only increase its happiness by 25%. If there's a Unity Tree on the island, items don't need to be near the monsters. Below are the things liked by Epic Mammott:

To see how efficient Epic Mammott is at generating resources compared to other monsters check: 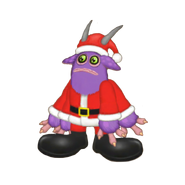