My Singing Monsters Wiki
Register
Don't have an account?
Sign In
Advertisement
in: Monsters, Earth, Cold,
and 14 more

The Drumpler is an orange-red goblin-like monster. It has a short tail with three small brown spikes on it. Its eyes are a light yellow color. It also has two legs, with brown hooves on its feet, meaning that the Drumpler is perhaps an even-toed ungulate. Its face is large and directly attached to the body, without being supported by a neck. It has fiery spikey hair, elf-like pointed ears and two small, rounded, yellowish teeth protruding from its mouth. Darker orange-red spots run down its arms and legs. It has two large yellow hands with four fingers each that hold tan wooden drum sticks that it uses to play on its enormous yellow belly.

When this monster is idle, it stays in tempo by tilting back and forth.

The Drumpler Monster's contribution to an island's song is a snare drum sound, having a different type of snare drum based on island. It uses wooden, beaded sticks to play on its abdominal hide, creating single stroke and tremolo rudiments.

The Drumpler can be produced by breeding monsters with the elements of Cold and Earth.

While trying to breed other monsters (particularly monsters with a very low chance of breeding), the following Wublins can be used to "dispose of" Drumpler eggs immediately instead of putting them into a Nursery and having that Nursery not be available.

While trying to breed other Monsters (particularly Monsters with a very low chance of breeding), the following Celestials can be used to "dispose of" Drumpler eggs immediately instead of putting them into a Nursery and having that Nursery not be available.

To see how efficient Drumpler is at generating resources compared to other monsters check:

"Drumpler" could possibly be a shorter version of "drum-player." Another possibility is that the name comes from the word "drumlin", which is a hill left behind by a retreating glacier.

To see all possible names for Drumpler, see Monster Names. 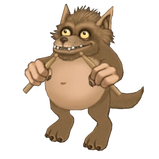 In October 2014, the Drumpler disguised itself as a werewolf, with gray fur and a long snout. This costume only appeared in 2014, but was eventually realised into its Epic counterpart.