My Singing Monsters Wiki
Register
Don't have an account?
Sign In
Advertisement
in: Monsters, Dipsters, Elements,
and 14 more
English

This is the main article for Dipsters. For the category, see Category:Dipsters.

Dipsters are a set of seven Monsters that each only play typically one note of the musical scale, hence the names Do, Re, Mi, Fa, Sol, La and Ti. All of these seven monsters were released in the 1.4.2 update. They pop up from the ground each time they sing a note and every note is a "dip," singing a certain pitch depending on what their name is. They also have different natural items on their heads.

These Monsters are all unlocked at Level 10.

Dipsters don't stay on the same note on every island. Instead, they follow their respective Natural Island's key and sing their respective pitch associated with their note type. One other note is that on some islands, such as Cold Island, they do not necessarily sing the same pitch that their respective musical pitch name represents; instead for these occasions, each Dipster sings one of 7 different type of pitches whenever contributing to their entire song. Dip!

Dipsters cannot be bred. Instead, Dipsters are bought with Keys, which can be earned as a gift from a Friend, Daily Login Bonus or from buying keys from the Store. By default, all players start with 3

The food per level is the same for all Dipsters.

The name Dipster is a portmanteau of Dip (what they sing) and monster.

In December 2019 and 2020 the Dipsters became little Christmas decorations. Do was a present, Re was a Christmas bow, Mi was a stocking, Fa only had snow on it (likely due to pinecones already being associated with Christmas,) Sol had snow on its head as well as 2 candy canes, La had a snowman’s head on it and Ti had the top of a Christmas tree with a yellow star on top.

In October 2020, the Dipsters became various halloween props. Do is a hand rising out of the ground, Re is a skull, Mi is a music box with a ghost, Fa is a gravestone, Sol is a pumpkin, La is a witch hat and Ti is a bag of candy. They also shared a green glow in their eyes and noticeably pointier teeth.

) is an element only used by the Dipsters. It looks like a yellow flower planted in fresh soil, or what’s on top of Ti’s head. It cannot be used in breeding. 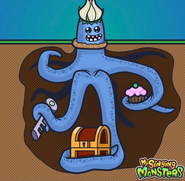