My Singing Monsters Wiki
Register
Don't have an account?
Sign In
Advertisement
in: Articles in construction, Monsters, Game Mechanics,
and 2 more

This is the main article for Currency. For the category, see Category:Currency. 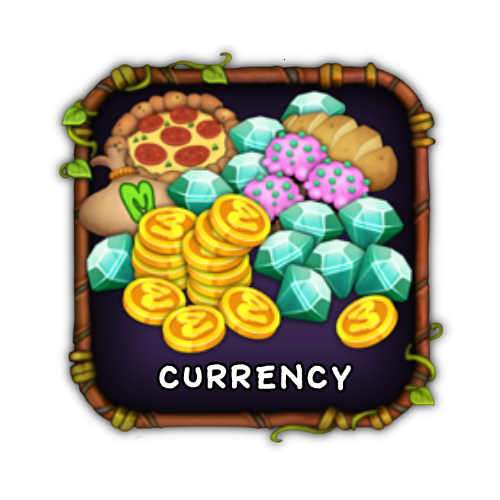 My Singing Monsters uses different types of currency that help you in the game. There are eight currency types available. Each one has its own particular traits and is obtained in different ways.

) are the most important resource early in the game, since it is required for baking Treats (

Your main source of Coins is from collecting from your Monsters, but other ways to get coins is from the offerwall and by purchasing them with real money.

) are the main premium currency of the game and the most important resource except in the early game. It is the only way to purchase and upgrade many Structures, and can also be used to speed up breeding, or even be converted to other currencies (not advised!).

The main source of Diamonds is from Mini-Mines and Wublins. It is also possible to use Diamond Farming techniques to maximize production.

) is a secondary currency. It is baked in a Bakery, or collected from Wublins, Celestials and level 16+ Monsters. It is only used for feeding monsters, including (very inefficiently) at Tribal Island.

) is a secondary resource, mostly generated from Ethereal Island and Magical Sanctum (instead of Coins (

), but also from Wublins and Celestials. It is used for purchases and clearing obstacles on Ethereal Island and Magical Sanctum, as well as for leveling up your monster on Tribal Island.

) is a secondary currency that you get weekly from Tribal Island depending on your own and the total tribe level, as well as a prize from The Collosingum's Versus mode. It is used to purchase Rare Wubbox, special Decorations and sometimes Rare Monsters from the StarShop

) are a special currency used exclusively to buy Dipsters. The primary sources of Keys are Daily Login Bonus and weekly gifts from Friends.

) is a secondary currency. The most important source of Relics is from the Daily Login Bonus, and bought from the Marketplace with Diamonds (

). Relics are used for purchasing Werdos and Fire element monsters/vessels, as well as clearing obstacles on Amber Island.

) are a special currency exclusively used to buy Costumes and Decorations in The Colossingum. The only source of Medals is completing Battle Quests.

Not considered are exchanges using real world money (In-App Purchases) due to pricing differences in different countries, fluctuations over time, and frequent sales events. Also not considered is investment into Monsters, such as feeding Treats to get more Coins, and getting Bonus Items from Monsters Level 16 and up.

Note: The amount of coins traded from exchanging diamonds increases when the player levels up.