) are one of the main resources in My Singing Monsters (Original Game), and are used to:

The Monsters themselves are the main source of Coins. Monsters placed on most islands earn Coins in proportion to their number of elements, level, and happiness. In order to earn Coins, the monster must be visible on the island (i.e., not inside of a Hotel), but they can be muted (sleeping).  A monster can earn coins up to a maximum number which is proportional to its level but is not affected by its happiness.  When the monster's coin count reaches 75% of its maximum, a balloon with a coin icon appears over the monster, as a hint to the player to collect the coins. See individual monsters' pages for specific earning rates and coin limits.

Coins may be also purchased with actual money in the Market, or Diamonds can be exchanged for Coins.

Almost all Decorations and most Structures can be sold back at any time after they have been placed on an island. The sell-back rate is three quarters of the purchase price. There is no depreciation on older items.

Some of the Goals give rewards of coins, which vary with the difficulty of the Goal. Currently the largest Coin reward is 20 million coins for the goal of buying and placing a Tub Fountain.

The daily Spin Wheel available from the Castle has Coin prizes of various amounts. The most common award is around 100 coins, as it may scale up according to the player's Experience.

) but it is now a golden coin with a My Singing Monsters font "M" on it. (

1,999,999,999 is typically the highest amount the game will display on screen, but you can have much more. It is possible to open a support ticket to ask BBB for your current amount.

Having maxed out your coins mutes the sound of collecting coins from monsters.

For most of the early game, the best source of Coins are Quad Element Monsters, since they have both a high earning rate and a high maximum (so you don't need to collect as often).

The highest rate of earning possible is gained from a combination of Epic Wubbox and Werdos. 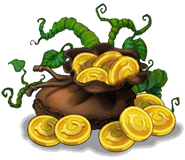 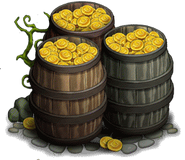 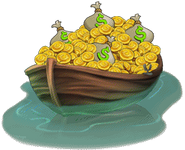 Pre-2.0.0 version of the Boatload of Money 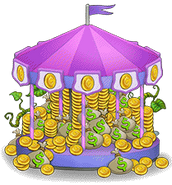 Pre-2.0.0 version of the Carousel of Coinage
Community content is available under CC-BY-SA unless otherwise noted.
Advertisement