) is an outer island in Dawn of Fire that contains only the adult version of certain monsters. Out of the four Outer Islands, Cloud Island has the third lowest level restriction, level 15, for monster teleportation. Baby Monsters from the Continent can be placed in the Teleporter under the Cloud Island heading once they reach level 15. As the baby monster teleports to Cloud Island, it transforms into its adult version. There are currently nineteen different monsters that can be teleported to Cloud Island. 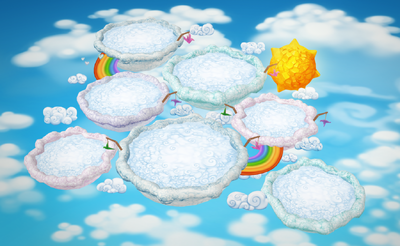 It consists of four large clouds with flat tops, surrounded by more, stylized clouds and a large rocky 'sun' to the north east. Out of the four main clouds rainbows sprout, and wooden structures with hanging origami-style creatures stick out.

The monsters of Cloud Island, like the rest of the Outer Islands, are of the Natural Elements: Earth, Cold, Water, Plant, Air, and Fire.

It plays at a key of C Major, with the Woolabee and Shellbeat playing on all parts in the song, even if all monsters were present on this island. The song plays at approximately 110 beats per minute.

The song starts with the Thrumble singing "Ho-hum" while the Woolabee and Shellbeat play throughout the whole song. It continues with the Whaddle singing the new melody and the Flum Ox singing part of the harmony. The Sneyser and Incisaur also join in.

In the next part, the Whaddle, Thrumble and Flum Ox stop singing while the PomPom, Reedling, Boskus, Tiawa, Entbrat, and Tweedle sing the next part. The Sneyser and the Incisaur continue to play during this part, and the Drummidary makes an entrance after the first part of the measure. The Phangler, Ziggurab, and Krillby then join in after the first bit of this part.

This measure is the second measure repeated, however, the Shellbeat, Phangler, and Krillby play differently; the Shellbeats does its upbeat beat throughout this measure, the Phangler plays 4 bars early, and the Krillby does not play at all. The Flum Ox also joins this measure, and the Ziggurab and Drummidary play after the first part of the measure. Then the song repeats back to the Thrumble.

This chart shows when each Monster is performing. Each part is 16 beats. 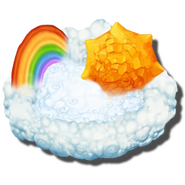