This is the main article for Cave Island. For the category, see Category:Cave Island.

) is an outer island in Dawn of Fire that contains only the adult version of certain monsters. Out of the four Outer Islands, Cave Island has the highest level restriction, level 20, for monster teleportation. Baby Monsters from the Continent can be placed in the Teleporter under the Cave Island heading once they reach level 20. As the baby monster teleports to Cave Island, it transforms into its adult version. There are currently seventeen different monsters that can be teleported to Cave Island. 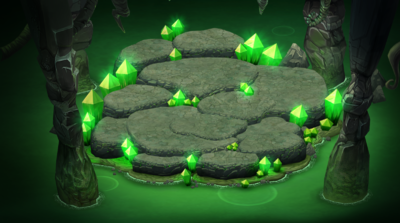 It is within a seemingly endless underground cavern with an underground lake. Large columns of rock reach from beneath the water up to the ceiling where more rocky formations stick down. the main island is a formation of multiple flat rocks raised up from the water. It is surrounded by large, glowing green crystals which cast a green light across the entire cave.

The monsters of Cave Island, like the rest of the Outer Islands, are of the Natural Elements: Earth, Cold, Water, Plant, Air, and Fire.

The song plays at 120 beats per minute in the key of A Minor. It plays in the 6/8 time signature.

It starts with the Quibble, Riff, PongPing and Shellbeat playing the intro.

The Shellbeat and Quibble repeat the intro but without Riff and PongPing.

The song continues with the Fwog singing a tune which sounds like, "Wah wah wah wah" with a pause, then repeats, with accompany of the Bowgart, Bisonorus, Krillby and Shellbeat. The Flowah also chants its "Hoo, Ka chu!" sounds during that time.

The song then repeats the Mammott/Kayna/Glowl/Bowgart/Floogull/PongPing/Barrb/Quibble/Yelmut/Wynq/Shellbeat/Thumpies part (Riff plays here too), except that PongPing joins in on the second third of the part instead of playing the whole way through.

This chart shows when each Monster is performing. Each part is 16 beats (in a 4/4 measure). 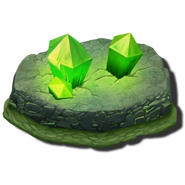