My Singing Monsters Wiki
Register
Don't have an account?
Sign In
Advertisement
in: Citations needed, Water Element, Monsters,
and 13 more

Bowgart is a triple-element Monster that is first unlocked on Plant Island. It is best obtained by breeding two monsters that have the combined elements of Plant, Water, and Cold. By default, its breeding time is 12 hours long. As a Triple Elemental, Bowgart does not have a high coin production.

The Bowgart can be bred using monsters that combine to give the elements Plant, Water and Cold. Possible combinations:

Because Potbelly and Maw take much less time to hatch than both Oaktopus and Furcorn, the first combination will provide more breeding opportunities in the same time period (on average).

(Best choice, 100% chance of a Bowgart if Rare Bowgart is unavailable)

(Good choice, 1% chance of a Ghazt/Grumpyre)

While trying to breed other Monsters (particularly Monsters with a very low chance of breeding), the following Wublins, Celestials, and Vessels can be used to "dispose of" Bowgart eggs immediately instead of putting them into a Nursery and having that Nursery not be available.

Note that bred Monster eggs can only be "disposed of" into inactive Wublins, Celestials, and Vessels; active ones do not accept Monster eggs. Also note that inactive Monsters to which you have already disposed the number of Bowgart eggs that it accepts, will no longer be available as a "recycle bin" for such eggs.

To see all possible names for Bowgart, see Monster Names. 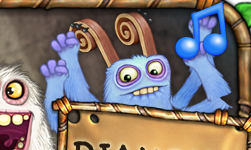