My Singing Monsters Wiki
Register
Don't have an account?
Sign In
Advertisement
in: Islands, Bone Island, Titans,
and 2 more

This is the main article for Bone Island. For the category, see Category:Bone Island.

Bone Island is a Magical Island in My Singing Monsters inhabited by Bone Monsters.

Bone Island is the tenth Island available to the player, the fifth Island with the Fire element in a breedable form, and the first island with the Bone element. 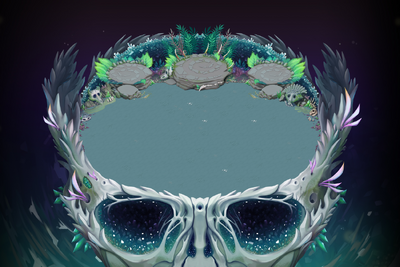 The Monsters of Bone Island are of the Earth, Water, Fire, and Bone elements. Since Bone Island lacks the Air, Plant, Cold, Light, Psychic and Faerie elements, no monster with these elements can exist on it. Just as with Fire Haven and Fire Oasis, there is also a difference with monsters that have the Fire element, as they take longer to breed and more difficult to obtain because of their long absence from the monster world; this also applies to the Magical Monsters.

There are currently no Special Occasions in Bone Island. Allthough beat hereafter could be on this island in the future

The song of Bone Island plays in the key of G Minor with some notes from G Major at a tempo of 160 BPM, in the 4/4 time signature.

Cost of each upgrade: Castle: of the island i