The first Anniversary Month Celebration started in 2013, celebrating the first anniversary of My Singing Monsters. Along with this came the arrival of Ethereal Island.

In 2014 and 2015, it started on September 4th and ended on September 30th. Every Tuesday and Friday of a week, various special offers, sales and contents were presented during the celebration.

In 2016, it started on September 1st and ended on October 4th, 2016. Like always, various special offers, sales, and contents were presented twice a week. This was additionally the first year where Dawn of Fire celebrated Anniversary Month Celebration.

In 2017, it started on August 30th and ended on October 2nd. Alongside daily Mailbox rewards given during each day of September, there were a variety of special offers and/or special sales every few days.

In 2018, it started on September 1st and ended on September 30th (October 1st doesn’t have the special celebration). Every few days, there were a few special sales and/or special offers, as always. Additionally, Epic Monsters were first released at the start of the Anniversary Month Celebration.

This celebration is available ONLY on iOS and Android.

In addition to extra sales, there were a lot of new updates to My Singing Monsters original game. Additionally, there is a PlayYourPart contest starting from 6th September to 20th September with a Fire Frontier theme. Several days later, the island was revealed to be Psychic Island, containing an entirely new element, Psychic.

There is an additional celebration that began on the 30th of August 2019. Celebrations again are simply extra sales without the extra celebratory features.

Seasonal Notice
Add a photo to this gallery

In the 6th Anniversary, there is a new startup screen. This special Anniversary Celebration is dubbed as "#Mon6sters". The 6th Anniversary followed a Puzzle on My Singing Monsters social media outlets that ultimately announced the Epic Monsters. The celebration lasted between September 1st and September 30th that year.

Dawn of Fire celebration lasted between September 1st and 30th 2018 for that year. 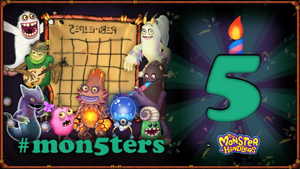 Because it's My Singing Monsters' 5th year anniversary, this special Anniversary Month Celebration is dubbed as "#Mon5ters". More info about Special Offers and Sales are to be added.

Anniversary Month 2014 promotion message
Add a photo to this gallery

During the celebration, Gold Island is adorned with Anniversary decorations. 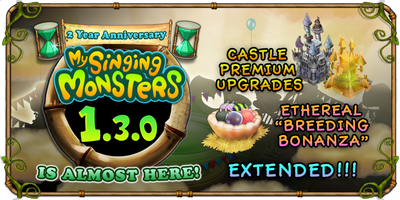 Retrieved from "https://mysingingmonsters.fandom.com/wiki/Anniversary_Month_Celebration?oldid=299134"
Community content is available under CC-BY-SA unless otherwise noted.