My Singing Monsters Wiki
Register
Don't have an account?
Sign In
Advertisement
in: Islands, Natural Islands, Air Island,
and 3 more

This is the main article for Air Island. For the category, see Category:Air Island.

Air Island is a Natural Island.

) is the third Natural Island available to the player. Air Island primarily manifests the Air Element (

after the player has bought Cold Island.

Air Island was the first island to home the Schmoochle (The other is Gold). The air island is also the only Natural Island that features 2 seasonal monsters. (Hoola & Schmoochle). The island is home to the third quad-element; Riff. As well as the Yawstrich the second mythical monster.

Below is a picture of the raw island; 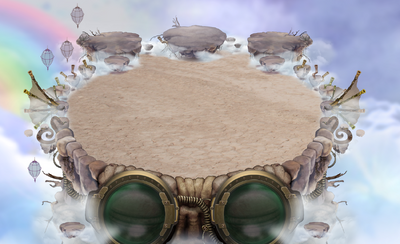 The monsters of Air Island are of the Earth, Cold, Water, and Air elements. Since Air Island lacks the Plant element, no monster with that element can exist on it.

Main article: Obstacles
Removing the rocks and trees from the island earns the player Experience and it opens up space to place more Monsters, Decorations, or Structures. Removed obstacles are not gone permanently; they can be bought back with Diamonds under the decorations section in the Market.

The full Air Island song is available on iTunes for download. The Air Island's song is in the key of G major. The song plays at 140 beats per minute.

Main Article: Castle
To be placed on an island, each monster requires a specific number of beds. For Natural Monsters, this is equal to the number of elements that monster represents. Ethereal, Supernatural, Seasonal, Mythical, and Rare (only the Rare Wubbox) Monsters each have varied bed requirements. Upgrade the Castle to unlock more beds.

During and around Valentine's day, the monster world celebrates the Season of Love celebration. During this time, Air Island is adorned with themed decorations, and all obstacles are changed to seasonal versions. Although a special holiday, no monsters dress up in costume for the duration of the Season of Love celebration. Some monsters dress up for the Spooktacle and Festival of Yay seasons, however, Air Island does not change during those times. To see monster costumes go here.

During the holiday season of SummerSong, Air Island does not change, but does have access to a second seasonal. SummerSong primarily happens on Earth Island.